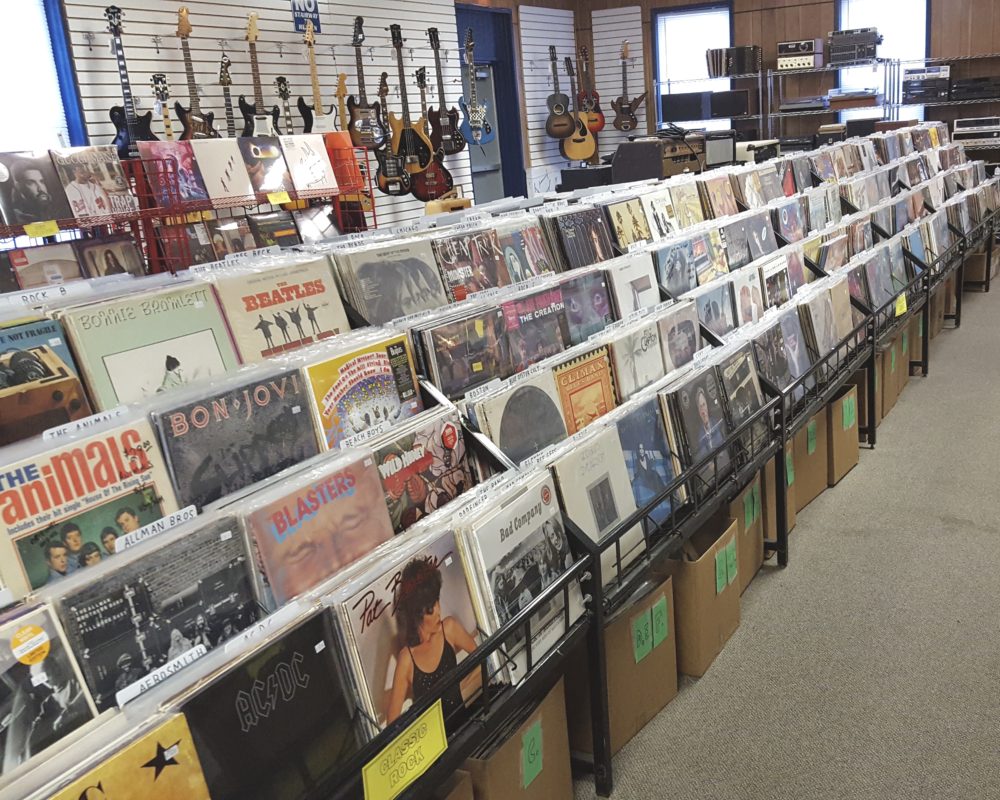 15 Dec CAUTION: STAIRWAY TO HEAVEN AHEAD

Along with their reputation as the best record shop in the Quad Cities, Ragged Records & Music literally, and figuratively, brings the music back to downtown Rock Island.

When asked how he decided on downtown Rock Island for a second location, owner Bob Herington described how a good opportunity came up. “It was all kind of by chance, really. Pat Stolley operates Future Appletree Studio in that building and told us the second floor was opening up. We had talked about opening another musical instrument store since Music Go Round in Davenport closed last year, then decided to add the record store as well, so it made sense for us.”

Ragged Records & Music is located on the second floor of the recently remodeled Laborspace building at 311 1/2 21st Street, right next door to another popular musical draw, Rozz-Tox.  Bob talked about how happy he is to have the store where it is. “We really like that little area there next to Rozz-Tox.  We’ve partnered with them for the All Senses Festival and a lot of other shows and events.”

In addition to the hype surrounding new and used vinyl records, CDs, turntables and stereo equipment, Ragged Records & Music in Rock Island offers a variety of unique vintage instruments and amplifiers.  They also have new accessories such as guitar strings, picks, straps and cables.  Feel free to drop in with your used gear and music, because Ragged buys and trades, as well.

Bob is looking forward to the opportunity to welcome current and new customers with the downtown location’s extended hours.  “Over in Davenport we have limited hours from 10:00am to 5:00pm – and we get complaints that we’re not open when people get out of work.  Now we have a record store in Rock Island open from noon until 8:00pm Monday through Saturday to accommodate those people.”

Christmas will be here before we know it, so stop into downtown Rock Island’s newest place for all things music at Ragged Records & Music to give a loved one (or maybe yourself) the gift of that vintage sound!