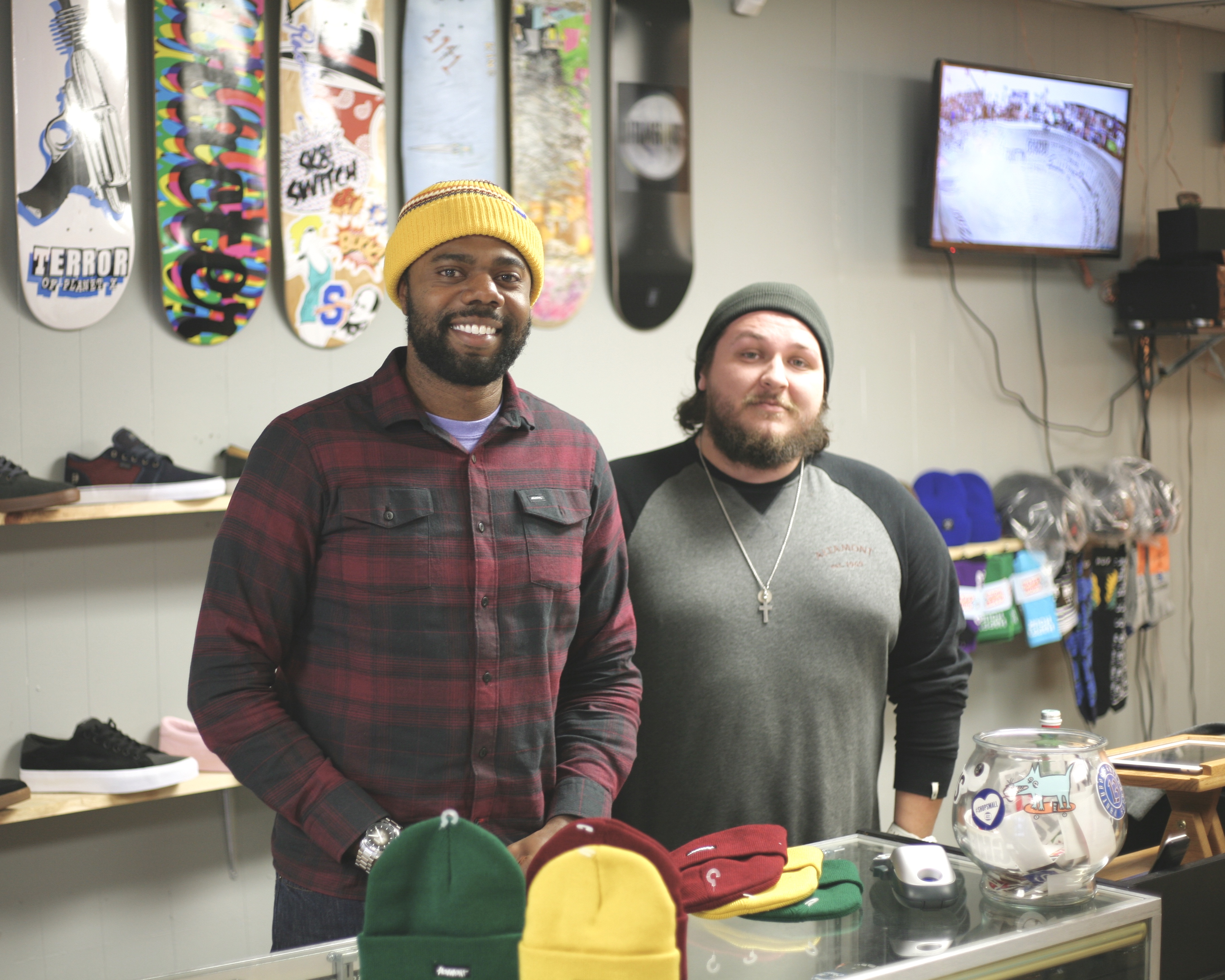 15 Dec ROLLING INTO THE FUTURE WITH STYLE

Skateboarding is like a never-ending puzzle with a ton of variations and combinations. You can do the same trick over and over, but it’ll never feel the same.

Quad City area native James “Sean” Farley Jr. first got into skateboarding around the age of 12 when a friend brought a board back from California and started showing him different tricks. From there, Sean was hooked and tried to conquer every trick possible, but he quickly learned, after a really hard fall, that it doesn’t work that way. This is what has kept him passionate and interested nearly twenty years later.

Back in high school, Sean and his friends had the idea to move somewhere where it’s warm year-round and start a skate shop. A few weeks later, that idea changed along with everyone else’s priorities. The idea stuck with him through high school and was put more on the back-burner through college. After graduation and moving back to the Quad Cities, it was the closing of a long-time favorite skate shop that made Sean believe there was a need to be filled.

It would be another year or two before feeling the time was right and the opportunity was available to open his own storefront. It took weeks of working on the business plan in addition to months on the designs, marketing and different branding concepts. He registered the original shop name about a year before going forward with the brick and mortar store front which opened in July 2014.

We recently caught up with Sean and manager Chase DePaepe to talk shop and find out what’s changed in nearly five years and what we can expect in the months to come.

The business started out in The Shoppes on 2nd, a retail business incubator in downtown Rock Island. It turns out that this was a great starting point to get things rolling. “I didn’t have to dive into anything serious until I was absolutely comfortable and certain,” mentions Sean.

Starting out wasn’t so easy. At first, Sean says, “At times it felt like I was completely on my own. I didn’t feel like there was a support system per say. It was hard at first, but once I started taking trips to Chicago, Des Moines, Cedar Rapids, and other cities, I found that other shop owners go through the same things.”

For him, it’s nice to know that he’s not the only shop owner who faces similar challenges which boosts morale during the tougher times. One comment that sticks with him is from a shop owner in Chicago. He was told, “You’re doing the same thing we are. We just have a larger location.”

In April 2018, Sean embarked on a rebrand, which included an expansion of inventory as well as a name change to 1986 Board Supply, incorporating the year he was born. As an 80’s baby, he loves  the aesthetic from that decade. In addition, he wanted to make sure everyone knew the store’s core value is skateboarding and everything else comes after. So far, the new name has been a lot easier to work with and draws curiosity from passersby.

The original name of the store, Switch Stance Skate Shop, came directly from skateboarding. A “switch stance” is the opposite stance from how a skateboarder would normally ride a skateboard. The name suited the store in the beginning, but as the store grew, the name didn’t seem to really fit any longer. Though a lot of people still reference the original name, the new name is a better fit in Sean’s opinion.

The early addition of Chase as the shop’s manager has also been beneficial to 1986 Board Supply’s current growth. “It’d be hard to imagine running the shop without him,” notes Sean. “He works well with customers, especially kids who are getting their first board. They  are excited and he makes the experience very interactive by allowing them to help set up their first board. They feel more involved in the process. They get the opportunity to learn how to set it up and the parents love that. They usually come back for their next board, and that’s an incredible feeling.”

The shop offers a line of products that are customized and completely unique. Branded shop tees, hoodies, and skateboards are very popular. It shows that not everyone has to be a skateboarder to support what we’re doing. This helps bring awareness to the brand and expand into new markets.

So what does the future hold for 1986 Board Supply? Sean explains, “We’re really excited about what 2019 has in store for us. Outside of our upcoming holiday sale, we plan on moving locations, so we’ll more than likely have a blowout sale to get some new inventory for the new year and store front. For spring, we’re planning on throwing the skate jam again. Be sure to stop by the new location in downtown to check out the new layout and product available. You don’t have to skate to support your local skate shop!” We agree.