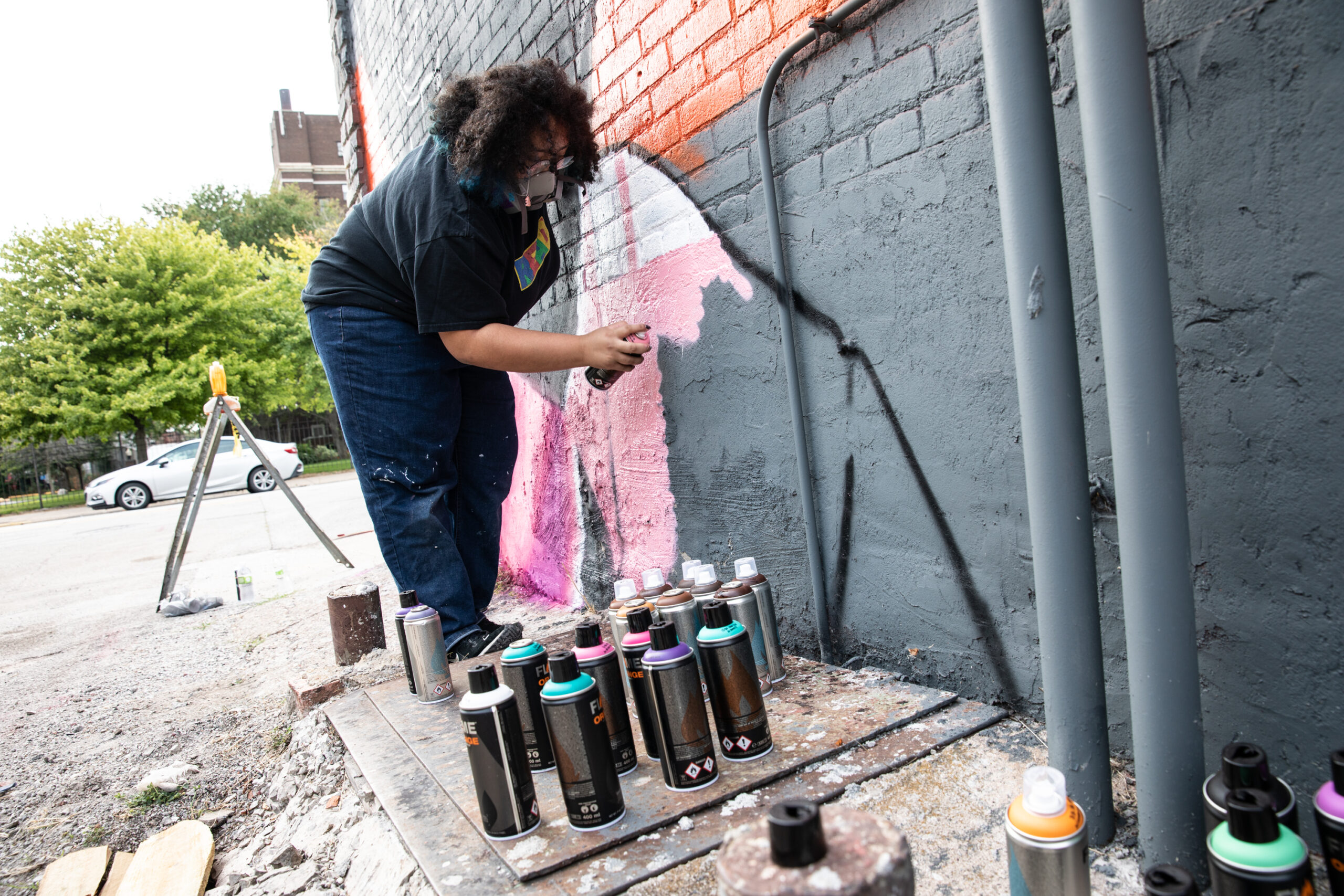 For most of her young life, art has been a private refuge for Riley Jones – a hobby she kept to herself. But after the Rock Island teenager’s artwork took first place in the 2021 Congressional Art Competition and was chosen to be displayed in the U.S. Capitol, she was recruited to share her talents in a new mural program in Downtown Rock Island.

The 16-year-old Riley, whose originally titled “Black Pride” piece was inspired by the Black Lives Matter movement, was asked to create a large-scale mural in Downtown Rock Island for the new program launched by Quad City Arts and the Quad Cities Chamber through its partnership with the City of Rock Island.

Collaborating with professional muralists Dana Harrison (Limone) and Brandon Warner (ASPHATE), Riley transformed a blank brick wall into a beautiful and thought-provoking mural. The new mural will be unveiled at 4:15 p.m. Thursday, Aug. 19, during a ceremony that also kicks off the Alternating Currents festival, planned for Aug. 19-22 at more than 30 downtown venues in the Quad Cities.

Painted on the southern wall of 313 20th St. – across the alley from Leo’s Shoe Repair, Riley’s mural is part of a larger revitalization project on the edge of the downtown core. Property owner Matt Stern and his team plan to renovate an adjacent vacant lot and multiple storefronts, two of which are for lease.

“This is a prime example of creative placemaking in Downtown Rock Island,” said Jack Cullen, the Chamber’s Downtown Rock Island Director. “In addition to generating positive buzz and foot traffic, professional, well-thought-out murals can help brighten, clean up and encourage better investment in areas we want to see improved.”

How the mural began

“I just wanted to draw something for the Black Lives Matter movement,” said Riley, whose own feelings about her work’s message have evolved. The original piece included the words “Black Pride” repeated in the background, which she omitted from the mural. She now sees the movement and the broader racial injustice issue as “something that has caused a lot of pain for Black people.”

Riley was contacted about the new mural program by the Chamber and Quad City Arts after her “Black Pride” piece was competitively selected by U.S. Rep. Cheri Bustos as the first-place winner in the Illinois 17th Congressional District’s contest. Riley is no stranger to Quad City Arts, having participated in its Annual High School Art Invitational and displaying some of her work at its gallery.

“Every year, I’m impressed by the incredible talent on display during the Congressional Art Competition and Riley’s submission was exceptional,” Congresswoman Bustos said. “I’m thrilled that Riley’s artwork will not only hang in the halls of the Capitol but also on the walls of Downtown Rock Island for all residents and visitors to see. I can think of no better way to display such a talented hometown artist’s work, and I am so proud of Riley.”

Riley, a Rock Island High School junior, is the daughter of Jerry and Kathy Jones. As a winning prize, Riley received two free airline tickets to Washington, D.C. But thanks to an anonymous donor’s gift of two more tickets, she now can bring along her parents and older brother, Peyton.

“Her art is very personal to her,” said Kathy Jones. “She doesn’t allow a lot of viewing for her parents.” In fact, if not for the encouragement of Riley’s former junior high teacher, her mother said Riley might not have entered the art contest.

Riley’s hope is the new mural showcases how Black Lives Matter “comes from a place of pain and grief and the unjust murder of Black people.” While it resembles her original piece, she said the new rendition “is more about the suffering being caused and people hurting.”

Riley first became aware of racial oppression when she was in 5th or 6th grade and learned about the brutal murder of Emmett Till, a 14-year-old African American, who was lynched in Mississippi in 1955. “It hurt so much to learn about that,” Riley said.

“It was different than Dr. King being assassinated,” her father and Martin Luther King, Jr. Center Executive Director Jerry Jones said. “Dr. King knew of the repercussions. Emmett Till was just being a young man living his life.”

Riley channeled her interest in civil rights and her feelings about racial injustice into her art. “It’s not just political. A lot of people see this as an issue of Black people being mad at white people,” she said. “I wish they’d see it as a civil rights issue.”

Working with the muralists – both members of the nationally recognized Scarce Elementz Crew, a graffiti paint crew, the trio completed the mural in about a week. Previously, Riley gained mural experience through Quad City Arts’ Metro Arts apprenticeship program. She was part of A team of apprentices paid to paint an indoor mural at the new TBK Bank building in Downtown Bettendorf.

But her latest project was her first time using spray paint as a medium. As he watched her blend colors on the wall, muralist ASPHATE said “She’s killing it. To do that type of blending this early on is amazing.”

The muralists first met Riley weeks earlier, via Zoom, to plan the project. “In our first Zoom call, things got emotional,” ASPHATE said. “You could see the issue was a deep one. You could see it hit her hard. That spoke to me more than any conversation we could have had,” he said.

ASPHATE, who teaches graffiti workshops to youth in the Des Moines area, helped to suggest that Riley add a hummingbird to her mural. “It’s a sign of freedom,” he said, adding it also symbolizes “the light at the end of the tunnel: peace.”

The artwork marks the beginning of the Chamber and Quad City Arts’ new mural program. “This is a dream project for Quad City Arts as it not only adds great public art to our community, but it also provides an opportunity to mentor, encourage and celebrate a young artist,” said Kevin Maynard, Quad City Arts Executive Director.

With Downtown Rock Island as the canvas, the addition of new creations will raise awareness of the art and cultural amenities it offers. Efforts are underway to identify more potential mural sites.

“This first mural supports the development of a talented young artist of color in our community and furthers the conversation around racial equity,” Downtown Rock Island Director Cullen said. “It’s a winning project for the entire Quad Cities region as we work to create a more creative, welcoming and vibrant destination.”