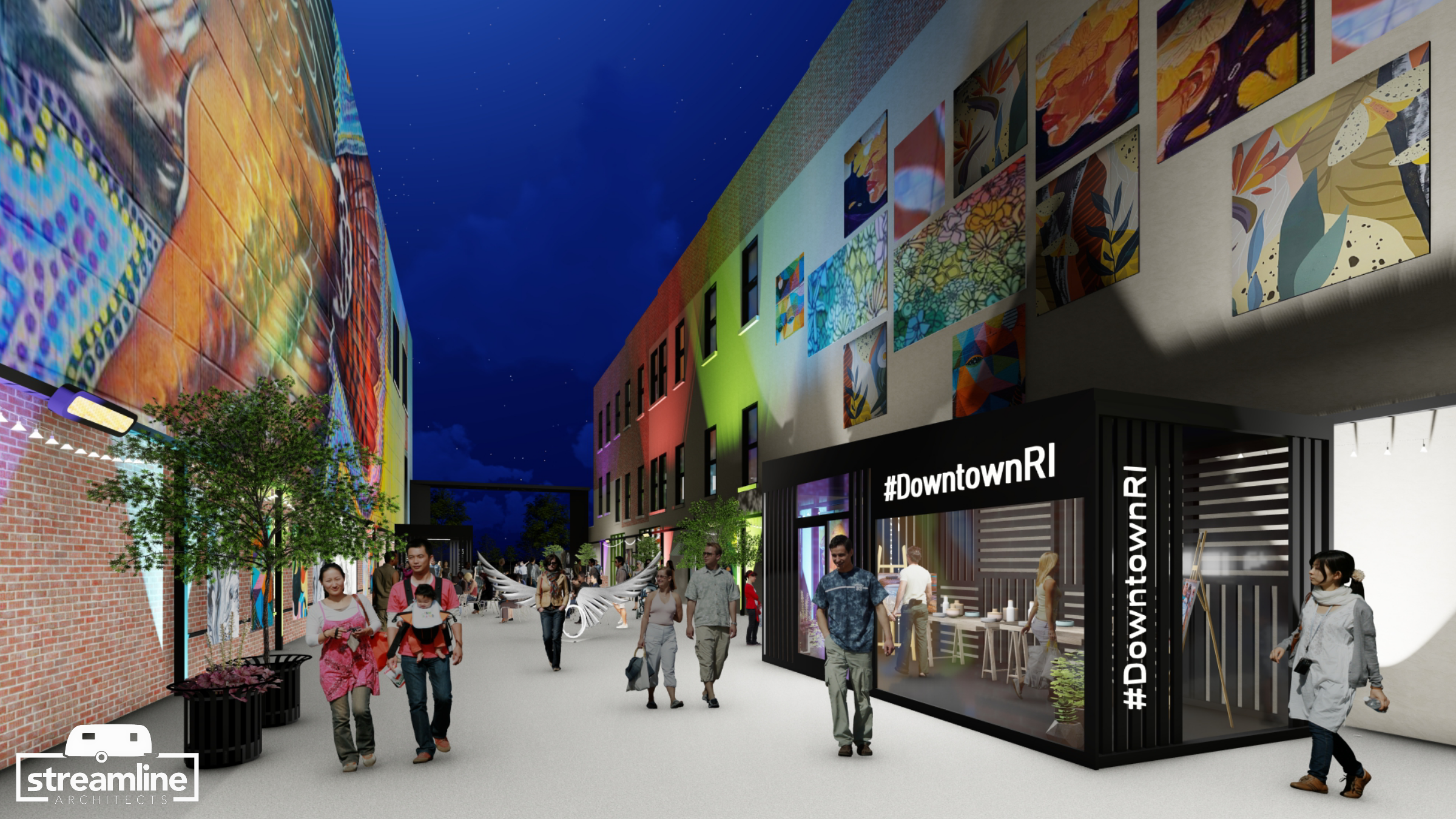 Arts Alley, the public alleyway at 1719 2nd Ave. in Downtown Rock Island, will undergo a major facelift thanks to a $267,181 grant award to the Quad Cities Chamber and City of Rock Island from the Illinois Department of Commerce and Economic Opportunity (DCEO).

“These types of statewide grant programs are extremely competitive, so it’s exciting to see the State of Illinois recognize and support our ongoing efforts to revitalize Downtown Rock Island through this award,” said Jack Cullen, Director, Downtown Rock Island for the Chamber. “Arts Alley is a unique but underutilized shared space, and this funding will allow us to turn it into a vibrant urban art gallery, event venue and family-friendly destination for both Quad Cities residents and visitors.”

The planning process, including outreach to Downtown stakeholders, is underway. Community members are encouraged to check out the digital renderings for Arts Alley (click on image to enlarge) and provide input on the draft plans. Upon final review and approval by Rock Island City Council, the project is expected to begin this fall and finish in 2023.

Proposed additions to Arts Alley include ornate signage, lighting, professional murals, interactive art installations, spaces for live performances and film screenings, new pavement, landscaping and a heating component to make it accessible throughout the year. Rentable vendor stalls will also provide a platform for entrepreneurs and small business owners to sell their products during seasonal pop-up shop programs. Additionally, Modern Woodmen of America offered to dedicate space in its adjacent parking lot for a new enclosure that will host the existing dumpsters in Arts Alley and improve the overall visitor experience. 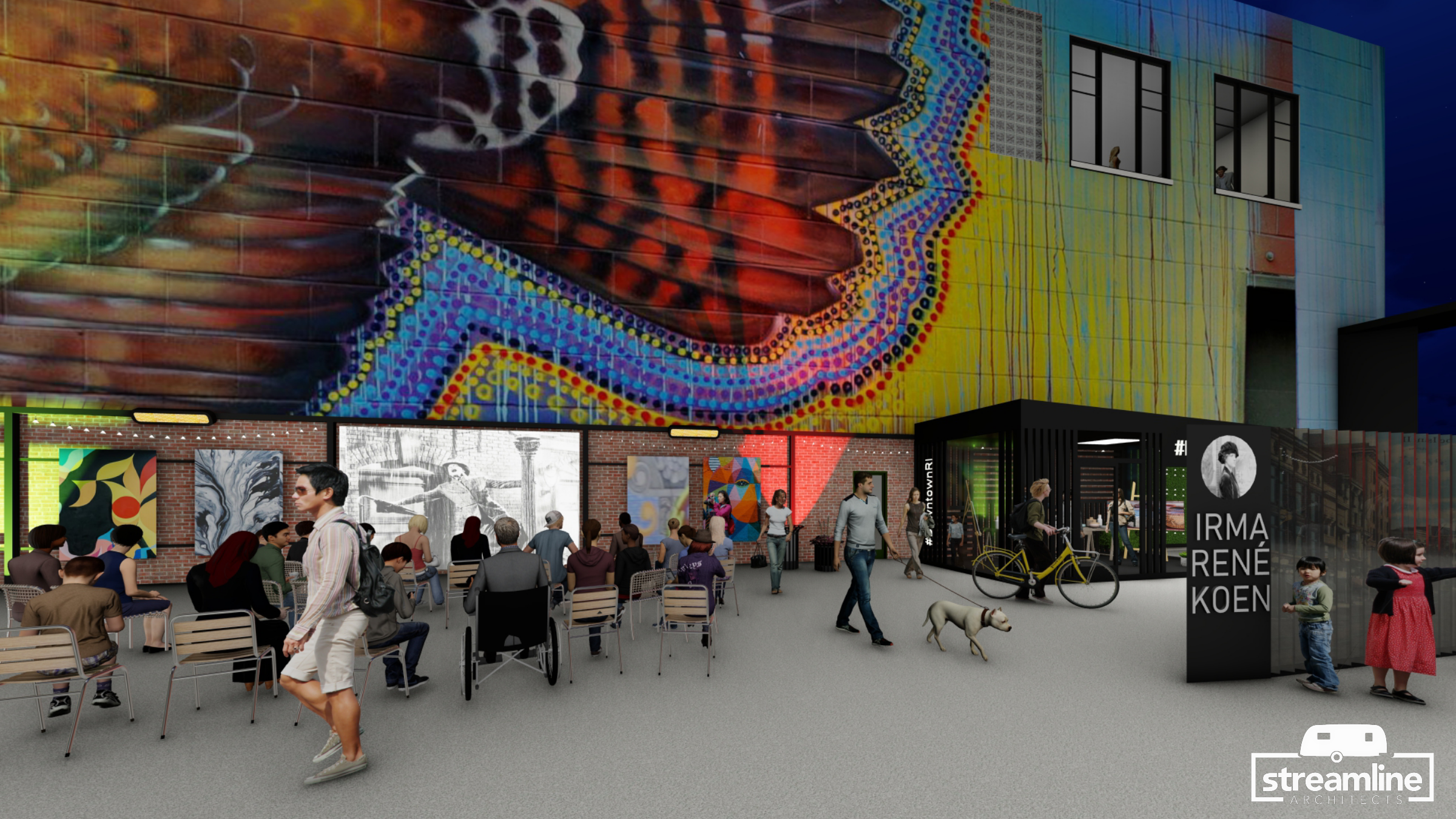 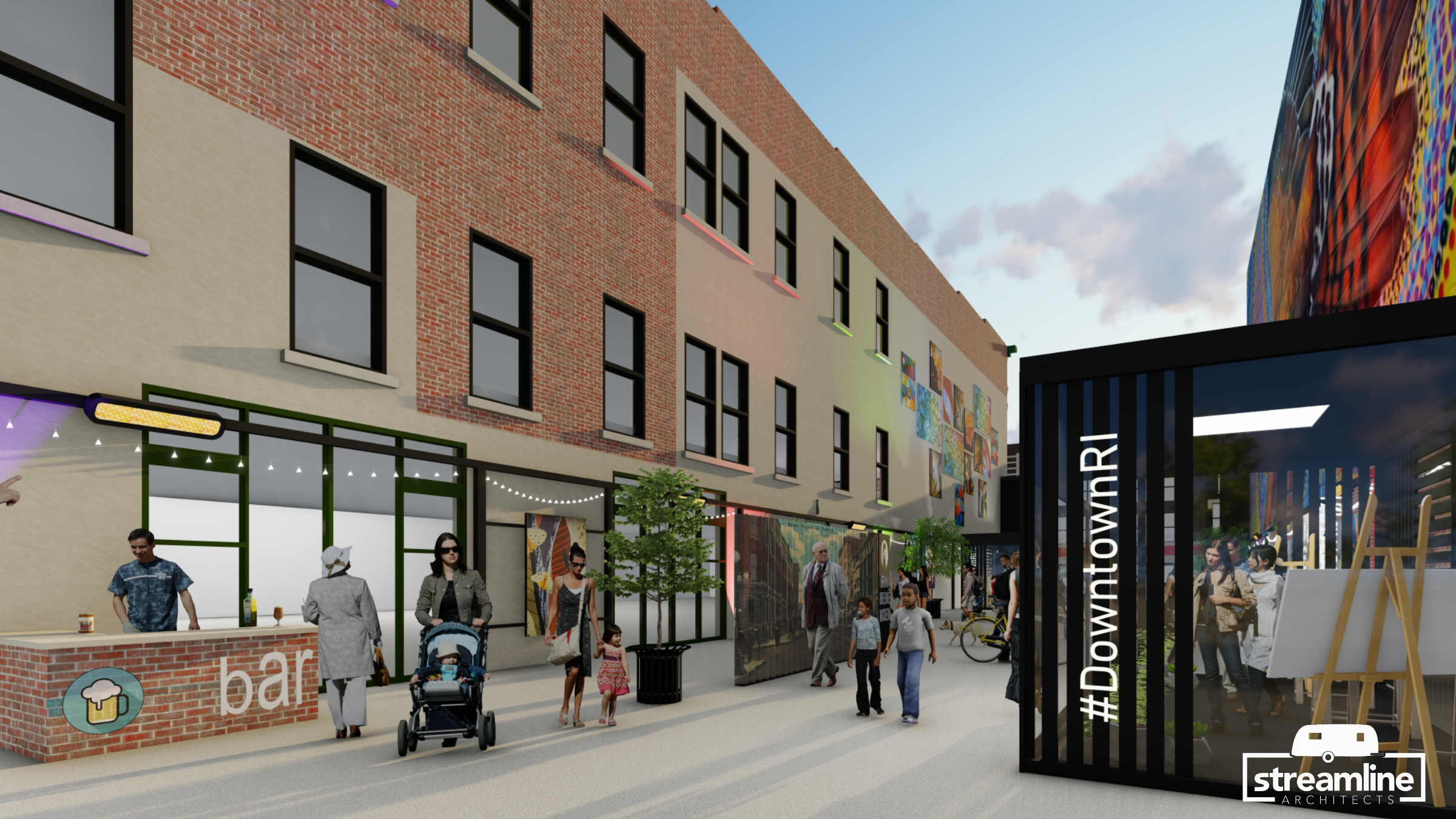 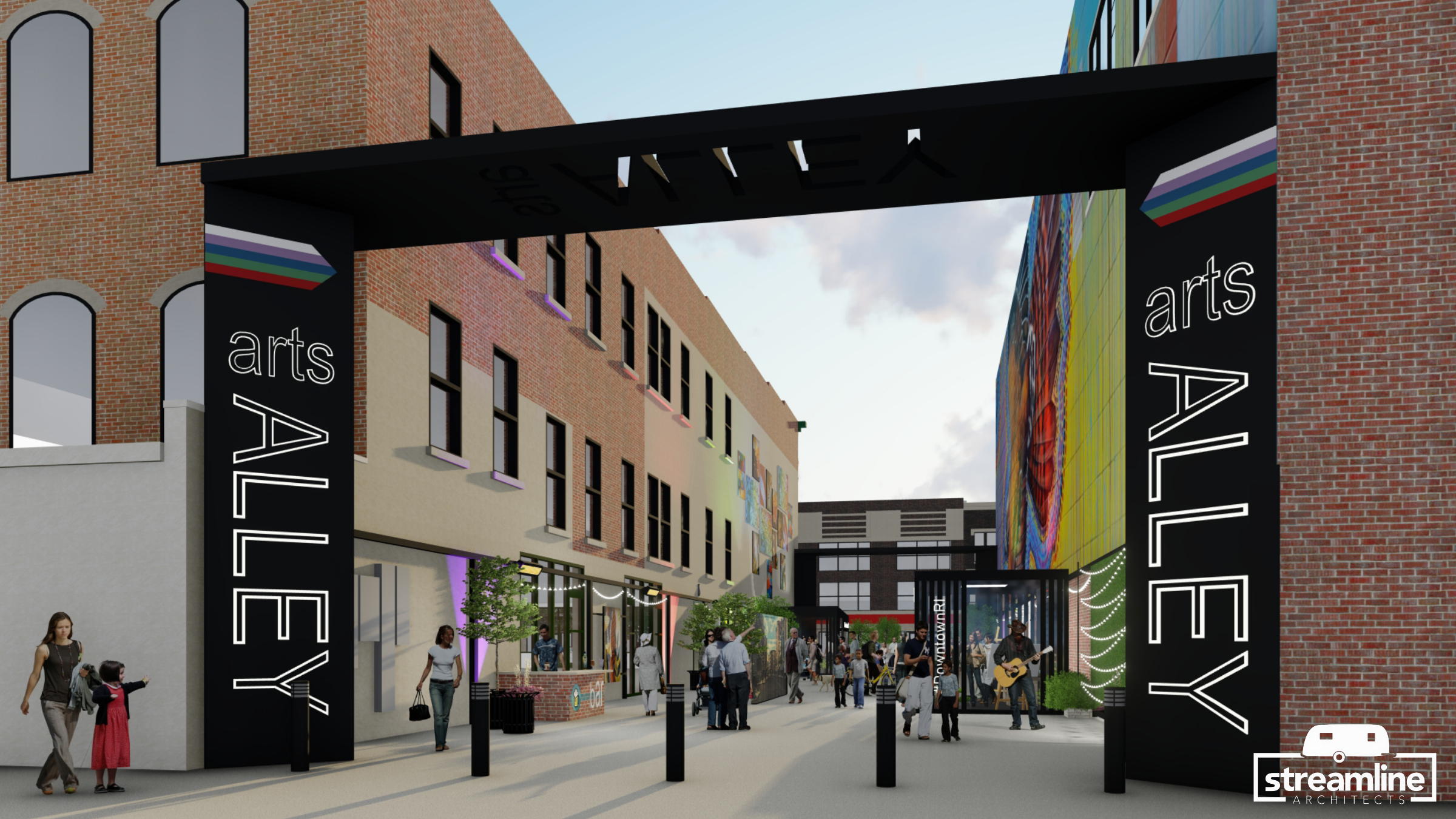 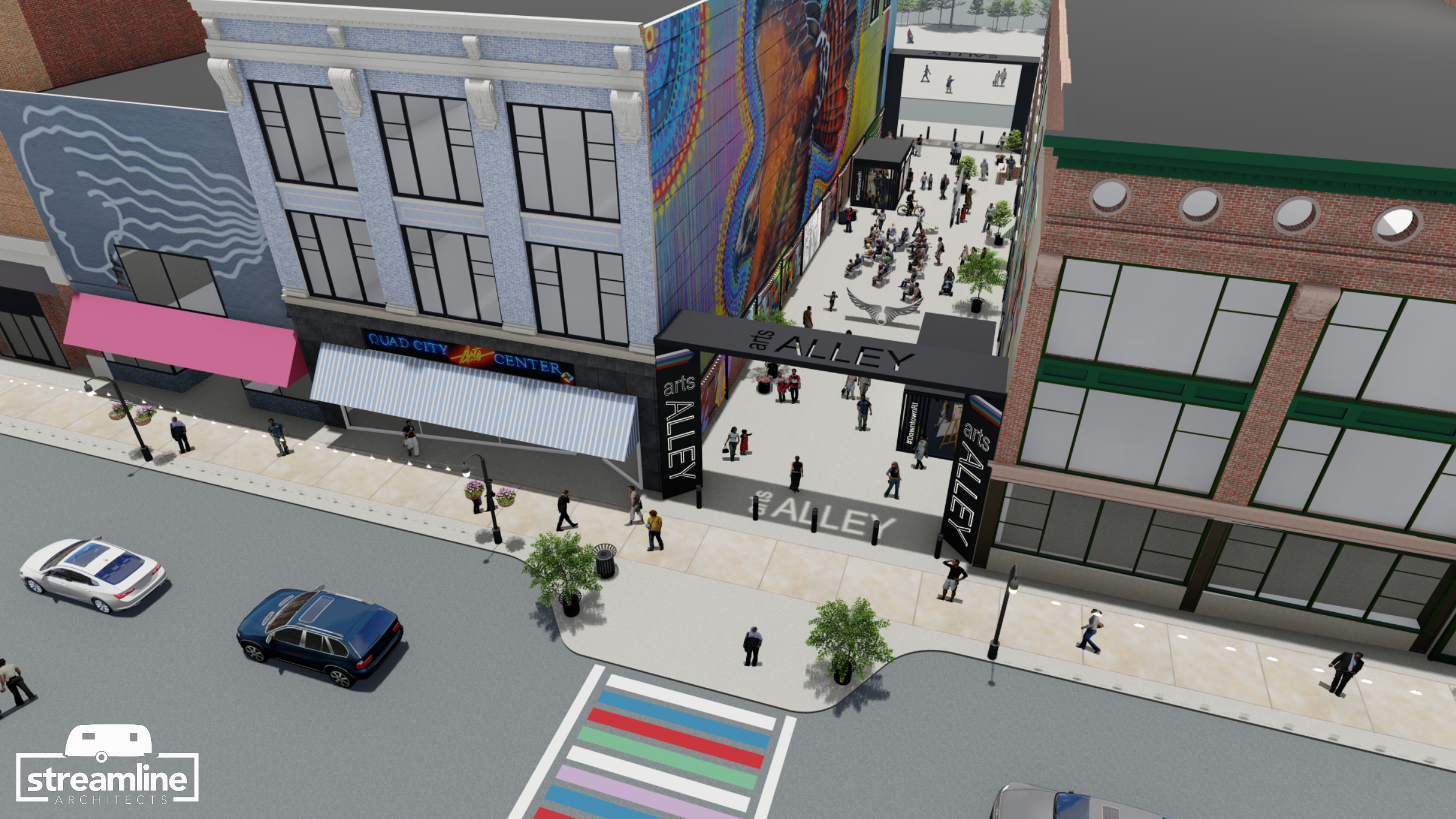 “The plans our team of partners and community members have come up with will reactivate Arts Alley and help reinvigorate the whole of our Downtown,” Rock Island Mayor Mike Thoms said. “It will also help supplement other funds the City is using for a larger revitalization effort in the Downtown.”

The City created Arts Alley in 1994 to fill a gap left by a demolished building and to establish a colorful pedestrian gateway between Rock Island’s riverfront and arts and entertainment district. Nearly three decades later, the newly proposed upgrades aim to implement specific points of public input from the City’s 2015 Downtown Revitalization Plan.

“An enhanced Arts Alley will benefit all of Rock Island,” said Kevin Maynard, Executive Director, Quad City Arts. “It will boost civic pride and be the catalyst for a true revitalization of Downtown Rock Island by increasing foot traffic to surrounding Downtown businesses, which will lead to increased interest in business locating in Rock Island and more events happening in Arts Alley.”

Nicole Watson-Lam, owner of Ms. BriMani’s Hair & Beauty Supply and The Urban Reserve, a new luxury event suite, is excited to see the investment in Arts Alley just a few steps away from her building and businesses.

“My life is invested in my building and businesses, and I want to see them thrive,” said Watson-Lam, who also serves as the Vice Chair of the Downtown Rock Island Steering Committee managed by the Chamber. “The Chamber’s partnership with the City and the work we’re doing with the Steering Committee is offering a starting point to better Downtown Rock Island and showing that there’s light at the end of the tunnel.”

Dave Herrell, President and CEO of Visit Quad Cities and Board Chair for the Illinois Council of Convention & Visitor Bureaus (ICCVB), applauded the State’s investment, calling it “a win for Rock Island, a win for the region and a win for the arts community that is so critically important to our destination development efforts and energy.”

“ICCVB and its members throughout the state work closely with the Illinois Office of Tourism (IOT) and the DCEO to drive tourism forward in Illinois,” Herrell said. “Governor Pritzker’s continued and consistent support of tourism is helping drive economic recovery and we are grateful that this project will be brought to life.”